Millie presses me to her cotton t-shirt with the acronym ERA stitched in big red letters across the front.  She seems to have grown shorter and wider since August when I first met her, her graying hair boyish, her eyes smiling out of the net of wrinkles behind her glasses.

In the evening, we sit in the kitchen and drink sweet cocktails called toasted almond.  Millie likes sweets as much as I do, as much as any Russian does, and she beams with pride when I say that she’s Russian at heart.  “My grandparents were Russian, you know,” she says and toasts me with her glass.  The drink is thick and delicious; it is made with heavy cream and two liqueurs I’d only seen once in a foreign-currency store in Leningrad when I worked as a tour guide, Amaretto and Kalua.

We don’t talk about Robert.  Just as with my mother, I don’t discuss Robert with my mother-in-law.  I tell her about life in Russia, so different from life here that there is never a dry spell in our conversation.  Kalua and Amaretto?  They are not available.  Heavy cream?  I saw it once in a café in Moscow.  Drinking?  Not the way we’re sipping a cocktail here.  Half a liter of vodka for every two guests; if you open a bottle, you must finish it; pickle marinade in the morning for the hangover – those unwritten rules we all learned from childhood.  Marriage?  At twenty four a woman is considered old, a spinster.  Men?  On March 8, International Women’s Day, men bring flowers, then watch television all night as women whip up holiday dinner in the kitchen between serving them drinks.  Children?  Most couples don’t have more than one; food lines, full-time jobs and misogynist husbands vaccinate women against motherhood.  The only available contraceptive is abortion performed without an anesthetic; you have to bribe the doctor to get one.  Millie shakes her head, and I know she thinks I’m making this up to entertain her.  Women’s rights?  She asks and now I’m the one shaking my head because I’m not sure if I don’t know the answer or simply don’t understand the question.

Back in Russia, my mother, like everyone else, climbed 5 flights of stairs to get to a doctor in the 1980s because Leningrad cardiology clinic was located on the fifth floor of a building with no elevator.  By the time a doctor began to inflate the cuff around her arm, her blood pressure measured a nice round 200/100.  “So what do you expect?” shrugged the doctor, an overweight and overworked woman with henna-dyed hair.  “You’re 72 years old.”

After my daughter was born, my mother retired from teaching anatomy and moved to New Jersey where I took her to my doctor, Dr. K.  He didn’t think that being in her 70s was a good enough reason to write her off the roster of life.  He has been treating my mother for 23 years, bringing her blood pressure down to 120/70, better than mine.  A few days ago, when we were driving to her monthly appointment, the office called my cell to warn us that the elevator was out of order.  “We can reschedule and come back next week,” I said, looking for a place to make a U-turn.  “No,” said my mother in her old, resolute voice – the voice that made her students quiver, the voice that didn’t usually put me in touch with pleasant memories.  “Ya podnimus’ – I’ll walk up.”

It was the 3rd floor, not the 5th, but she climbed the stairs just as she did back in Leningrad 25 years earlier, slowly but deliberately, resting on the landings.  Her blood pressure, when the nurse checked it, was 136/80.  A few minutes later Dr K. came and stooped over the report of her echocardiogram he’d ordered a month earlier because he’d heard a faint heart murmur.

“Left valve weakness consistent with atrial fibrillation,” he read, pinching his glasses up his nose, “moderate aortic blockage.  65 percent heart efficiency, which is excellent for someone her age.”  Her age now was 97, decades older than any of her siblings or friends back in Russia.  Her younger brother died of stroke 15 years ago; her medical school colleagues all lay in cemeteries, with Baltic snow and wind slowly erasing their pictures from their headstones.  Her former students – those still alive – rarely left their apartments, terrified of icy roads or ankle-deep puddles, counting the rubles to buy half a kilo of buckwheat with what was left of their state pension, losing teeth and memory.  We’ve seen Dr. K. age, too, his hair retreating, his sons graduating from business schools and already, according to his stories, earning more than their father.  Our doctor liked to tell stories.  We knew about his trip to a small town in the Ukraine to meet the cousin he’d never seen before; about yellow fever in 19th century New Orleans; about the young Dr. K dropping a bag with bones from his medical school onto a Buffalo sidewalk half a century ago, then flunking his first anatomy exam.  From my mother’s narrowed eyes I knew she didn’t like that story.  Had he been her student, she would have failed him too for such inexcusable carelessness.

He stood by the counter with my mother’s weighty chart, tall and graying, and recited the findings as if we were a medical symposium ready to offer our position on the treatment.  “I think she should see a cardiologist,” he said finally.  “I’d like to hear his opinion.”

Over the past 23 years my mother has seen a cardiologist, Dr. Sorvino, several times.  He has tapped on her chest, pressed the stethoscope to her ribs, made her blow into a cone, and performed every possible cardiology test, big and small.  I imagined taking my mother to his office again, an everlasting patient with few words of English, sporting new accoutrements of dentures and a cane.  I tried to imagine Dr. Sorvino now: a snowy helmet of hair, an efficient shuffle, age spots dotting his hands.  What could he possibly recommend?  A heart surgery at 97 to correct the left-valve deficiency?

I looked at my mother sitting in a chair, a mother who’d survived three husbands, two wars, and a psychopathic motherland – cruel, self-aggrandizing and unremorseful.  Her body has shriveled to 112 pounds, her face was a sea of wrinkles, but her eyes still gleamed like blue gems out of folds of loose skin.

“She just climbed up three flights of stairs,” I said.  “Does she really need to see a cardiologist?”

Silent for a moment, Dr. K. tapped his pen on the echogram report.  I knew he wanted to be safe; he was an internist, not a cardiologist.  I knew he’d lengthened my mother’s life by decades by treating her free of charge before she became a U.S. citizen, by arranging her breast cancer surgery with a fellow physician who owed him a favor, by putting her on hypertension medication not available in Russia.  I knew I would do whatever Dr. K. thought was necessary.

He stopped tapping his pen and turned to my mother.  “How are you feeling?” he asked.

“Goot,” said my mother, who still remembered a little German from the time when she was a surgeon at a front-line hospital during the war and who now mixed it with the little English she has been able to learn.  “Feeling goot,” she said and smiled.

The comments to my NPR essay Beyond Banned: Books That Survived the Censors (http://www.npr.org/2011/03/30/133810460/beyond-banned-books-that-survived-the-censors) came from readers of different generations and different countries.  In 500 words it was impossible to explore censorship in any depth, but even this short foray into the subject led to a few interesting discussions.

Even in this country, where freedom of speech is written into the Constitution, several correspondents expressed their concern about stealth censorship when “libraries and schools bow to small activist groups and second-guess themselves.”  This kind of censorship is often done under the guise of protection – from the offensive language, controversial ideas, or unsettling themes.  We’ve been repeatedly protected from the works of Mark Twain, James Joyce, D.H. Lawrence, and most recently, Mark Twain again.

One comment came from Russia.  “Probably it is the censors who should be blamed for the lack of moral scruples in Russia today,” the correspondent wrote.  “People were deprived of the words of truth, of the insights of artists, of the talent…  This is what censorship is about.”  What a fascinating and frightening thought: 70 years of totalitarian oppression – of censorship – has changed the people’s mindset and, as a result, the moral face of the entire nation.  It is true: the Russia of today is an immoral place.  Corruption and graft have sprouted through every level of the government, reaching down to each individual, like the tendrils of a poisonous plant.  As J.M. Coetzee observed, “People do not become better human beings by being degraded and oppressed.”  For 70 years, Soviet censors degraded and oppressed us, and this tragic legacy will forever stamp their guilt on the soul of our country.

A Mountain of Crumbs has been on the Globe and Mail bestseller list for 9 weeks now (# 3 and # 4).  Spasibo, Canada! 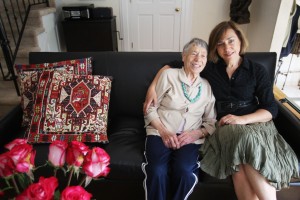