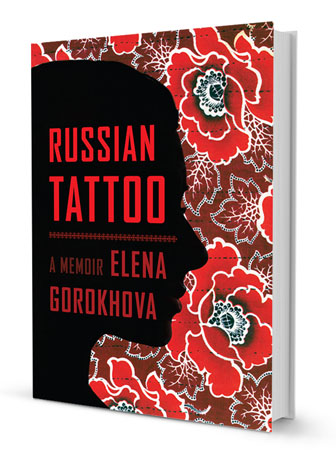 FINALIST for the William Saroyan International Prize for Writing

An exquisite portrait of mothers and daughters that reaches from Cold War Russia to modern-day New Jersey.

In A Mountain of Crumbs, Elena Gorokhova describes coming of age behind the Iron Curtain and leaving her mother and her Motherland for a new life in the United States. Now, in Russian Tattoo, Elena learns that the journey of an immigrant is filled with everyday mistakes, small humiliations, and a loss of dignity. Cultural disorientation comes in the form of not knowing how to eat a hamburger, buy a pair of shoes, or catch a bus. But through perseverance and resilience, Elena gradually adapts to her new country.  With the simultaneous birth of her daughter and the arrival of her Soviet mother, who comes to the US to help care for her granddaughter and stays for 24 years, it becomes the story of a unique balancing act and a family struggle: three generations of strong women with very different cultural values, all living under the same roof and battling for control.

“Russian Tattoo completes the task of nostalgia and self-examination. … Full of vivid imagery and memorable description, this is a wonderful trip into existential bewilderment. … As a sequel or a stand-alone, Russian Tattoo is compelling, colourful and hugely enjoyable.”
– The Guardian (UK)

“It’s a story that fascinates not only because of the sociological (rather than political) critique it offers of both countries, but because of the insights into the very human and personal story of one woman who experiences both.  Gorokhova’s English is flawless, eloquent and uplifting.  She breathes life into scenes from her memory in a way that bathes the reader in sensory reflection.  Russian Tattoo really does get under the skin.”
– Book Trust (UK)

“…written with a novelist’s touch. …a fascinating insight into life behind the Iron Curtain. …beautiful memoir. One of the most touching memoirs Ive ever read; I defy you not to shed a tear.”
– Culturefly, UK

“Elena Gorokhova… has written an exquisite memoir of emigrating from Russia.  …What does work, and beautifully, is Gorokhova’s writing.  It’s even more stunning when you realize that English is her second language.  …The last section, Petersburg, is just what the book needs, a reminder of the scents of her youth – wild mushroom soup, black currant jam and her mama.  It’s an apt ending to a magnificent book, all the more notable because memoirs are common and rarely this wonderful.”
– New Jersey Star Ledger

“…the ambivalent territory that immigrants must traverse… a wonderful read.”
–  Writer’s Voice

“Russian Tattoo tells the story of three generations of women searching for belonging. … Beautifully written, Russian Tattoo begins to sparkle when Gorokhova turns to the ordinary moments of her odyssey, the “bread and milk and chores, the things that make up a life.”
– The Jerusalem Post

“An affecting and beautifully written meditation on the mother-daughter bond; and on being inextricably caught in limbo between two worlds.”
– The Bookseller (UK)

“Elena Gorokhova undertook two major journeys.  One – from Russia to America – she described in A Mountain of Crumbs, and the other – from a clueless Russian immigrant to an American teacher and writer – in her new book Russian Tattoo.  The latter journey cannot be measured in miles.  The evolution – from a person for whom the word “pasta” meant toothpaste, which is what the word means in Russian, and who didn’t know a hamburger from a ham sandwich – took years.  Gorokhova describes that painful and confusing process in a candid and engaging way.  Her books are a must-read for those who want to know what an immigrant’s life is like.”
– Columbia Daily Tribune

“Life is soul-splitting – time and again – in Elena Gorokhova’s affecting second memoir Russian Tattoo.  [The memoir’s title] reflects Gorokhova’s easy, often witty approach to larger subjects, and the undeniable fact that hers is a life deserving of memoir treatment.”
– The Buffalo News

“…Gorokhova shares [the] sense of displacement in ways comic and profound. …Time and again, Gorokhova proves a shrewd observer of her surroundings and her personal foibles. … Her writing is exquisite in its simplicity.”
– New Jersey Monthly

“[Gorokhova] traded her bleak Soviet life for America, and she uses her foreignness (and an advanced degree in language education) to her advantage, filling the pages with fresh metaphors about American culture. … Gorokhova’s lovely turns of phrase carry the book.”
– Entertainment Weekly

“[An] evocative memoirist building on a fine previous volume… [Gorokhova] imbues this narrative of the gathering momentum of her assimilation with admirable esprit.”
– Elle

“[Gorokhova] provides readers with a fascinating glimpse into what it meant to fit into American society after growing up behind the Iron Curtain. …[A] worthwhile read.”
– Associated Press (reposted by ABC News, Denver Post, MSN.com, Post Bulletin, and Press of  Atlantic City)

“Gorokhova’s fluid and evocative prose will be familiar to readers of her first memoir. … the question whether it was better for her to come to the United States or to stay in Russia remains unanswered and unanswerable. … Her often rebellious – and very American – daughter ends up showing her where that elusive bridge may lie. It is an unexpected revelation that provides a satisfying end to Gorokhova’s narrative and, for a woman whose life seems so irredeemably bifurcated, offers a tender stitching together of souls.”
– The Washington Post

[Russian Tattoo] takes one to new heights of truly understanding the “guts” and significance of immigration… Many could identify with [Gorokhova] or tell a story similar to hers.  But it’s nearly impossible to tell it better than she did.”
– The Huffington Post

“[Gorokhova’s] prose trembles with anxiety and bafflement.  …Her trips to St. Petersburg are suffused with the “translucent dusk” of white nights, the gray waters of the Gulf of Finland, the glowing golden dome of St. Isaac’s Cathedral, strawberries and mushrooms in the countryside, the powerful memories of childhood. The life remembered, at times more vivd than the life lived.”
– Minneapolis Star Tribune

“If Elena Gorokhova’s splendid second memoir merely conveyed to readers a vivid, almost visceral understanding of the sometimes paralyzing sense of dislocation  she experienced arriving in the United States in 1980 from the Soviet Union, that alone would be reason enough to read it. .. nearly every page sings with sharp, intelligent, often witty observations about her new, confusing life in America. … But in a way, this section of the memoir is merely the brilliant surface of a more profound exploration of her split identity. … With these sorts of divides there are never clean resolutions, but as the illuminating final section indicates, there are soulful accommodations.”
– BookPage

“…deeply observant and as powerfully descriptive as a novel, Russian Tattoo is that rare book written by an immigrant that helps a native understand their country better, seeing it from the peeled-back perspective of a newcomer.”
– Russian Life

“Russian Tattoo is a page-turner from the start…. still writing in her engaging, fresh voice.”
-Booklist

“This incredibly powerful book slips into your unconscious with charm and warmth and then grabs you by the gut. By the time you reach the end, you’ll have experienced the laughter, sorrow, joy, regret, love and hurt of a real life. And you’ll have a lump in your throat the size of St. Petersburg. With a magical command of language, Elena Gorokhova has painted images on my brain I won’t forget, as if I’d lived those moments myself. Because, somehow, I did.”
– Alan Alda, writer, actor, director, playwright

“Elena Gorokhova’s memoir of her journey to America is delightful, hilarious and bracingly candid, a memorably odyssey of learning and striving as she escapes from the crumbling old world to a strange and mystifying new life.”
– David E. Hoffman, Pulitzer Prize-winning author of The Dead Hand

“Russian Tattoo is the story of an immigrant, of leaving what you know and love. It is the story of mothers and daughters, of three generations of strong women battling for control. It is about loss and grief, wounds that sever our souls in half and never heal. It is ultimately the story of love, forgiveness, and the desire to belong.”
Anya von Bremzen, author of Mastering the Art of Soviet Cooking